A Summer Meeting with the British Association for Community Child Health

A gloriously sunny morning welcomed us to the Summer Meeting for the British Association of Community Child Health (BACCH) held at Engineer’s House in Bristol. Michael and I (Liz Shaw) had been invited to share the results from a series of three reviews which aimed to explore the effectiveness of interventions to improve the mental health of young people with long-term physical conditions and gain an understanding of people’s experiences of these interventions. This project, affectionately known by the moniker #tlc4ltc, was submitted earlier this year and we are eagerly awaiting feedback from our funding body (the NIHR), on our final report. We wondered if our close collaboration with paediatricians, psychologists, young people and parents (amongst others!) during the project would have paid off. Would the paediatricians we met today be surprised by our results? Would they think it relevant to their everyday practise? Would our presentation be accessible to everyone who attended?

The first talk of the day was by Dr Valerie Rogers (Consultant Paediatric Rheumatologist and Pain Specialist) who works with children with rheumatoid and other chronic pain conditions at Bristol Royal Hospital for Children and Royal National Hospital for Rheumatic Diseases in Bath. She spoke about the different medical, psychological and social factors which could contribute towards a young person’s experience of chronic pain and the impact of parenting styles on pain-related difficulties. Dr Rogers spoke eloquently about the role of the paediatrician in trying to alleviate the distress of both the child living with chronic pain and their family.  In particular, Dr Rogers spoke about her role in validating the experiences of children and their parents and described the acceptance based approach (Acceptance & Commitment Therapy, or ACT) utilised within a specialist day centre in Bath. We were interested to hear about her preliminary findings following the evaluation of effectiveness of this programme; it was interesting that quality of life and other outcomes showed some improvement, despite no change in pain scores, highlighting the ‘acceptance’ aspect of ACT.

Louise Maggs, a Speech and Language therapist then talked about SoSafe, a communication tool to support young people with communication difficulties to learn about different types of relationships and understand how to keep themselves safe.

Dr Phil Hammond spoke next and for those who have not come across his work, it is difficult to succinctly describe his biography. A GP for 20 years, he is now currently working as an Associate Specialist in the paediatric chronic fatigue team based at the Royal United Hospitals in Bath. Amongst many other things, he is a regular contributor to Private Eye magazine and BBC Radio Bristol as well as doing stand-up comedy on the side. For someone who was only vaguely aware of his accolades prior to his talk, it is safe to say I was more than a little star-struck at meeting him afterwards. He spoke movingly on how his early childhood experiences had influenced his career decisions in later life. Continuing with his idiosyncratic mix of wit and pathos, he drew upon the challenges he faced later as a junior doctor and as a whistle-blower during the Bristol heart scandal to emphasise the need for self-care among clinicians. Take note of the CLANGERS model (but reference with caution, apparently the owners of the original show do not wish to be associated with this!). Phil Hammond added to the existing “CLANG” acronym, developed by The New Economics Foundation in 2008.

C to Connect with people and don’t live in isolation to others;

L to Learn new things and continually challenge yourself;

A to be Active;

N to Notice the world around you and savour the moment;

G to Give Back, do something nice for someone, smile, volunteer;

R to Relax, take time out to chill; and

S to Sleep, getting 6-8 hours of good quality sleep is fundamental.

Apparently, we all need to try and incorporate “5 portions of fun” into our day. I wonder how many researchers could also benefit from remembering this? (we do try!). 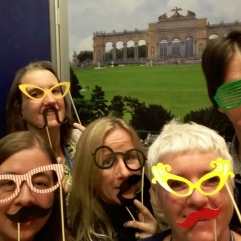 After such a powerful talk by Phil Hammond, we were really glad to have the lunch break to get our emotions in check and prepare ourselves before discussing our research with the experts. We need not have worried, this intimate audience were friendly and receptive to hearing about the results from our reviews and asked lots of interesting questions. Throughout the previous three talks, we had been heartened by hearing the clinicians talk about the importance of validation of the experiences of children and their families, and including family members in the treatment process. There are currently some important evaluations of interventions aiming to improve the mental health of young people with long-term conditions ongoing within clinical practice. The group agreed how important it was that these evaluations are carried out in a robust way and reported accurately so that this work is captured by researchers aiming to inform government treatment guidelines.

The final set of talks were delivered by Julie Kembrey and Josie Pavey, two bereaved mothers whose children had died due to their life-limiting long term condition.  They said that their talk came with a health warning and boy, were they right. The session focused on their experiences of receiving a diagnosis for their children, of preparing for death and their ongoing experiences of bereavement. Whilst a personal highlight of the day, their talk was devastatingly sad at times and highlighted the role that both clinicians and researchers have in trying to support parents of children with life-limiting conditions; especially during the bereavement process. We were both left inspired to do more work in this area.

We had a wonderful time and are truly thankful for the opportunity to be part of such an inspiring day.  To hear the various speakers talk so passionately about the work that they are involved in really helped place the findings of our review within a meaningful context and helped our work to “come alive”. We were made to feel really welcome and we felt we had experienced a “meeting of the minds” with mutual appreciation of the work that we are all doing in this important area. Long may the collaborations continue.