An early start on Friday 15th March for Harriet and Becca who attended the Neonatal Society Spring Meeting to present their findings from the PaReNt project, a systematic review of neonatal parent to parent peer support. 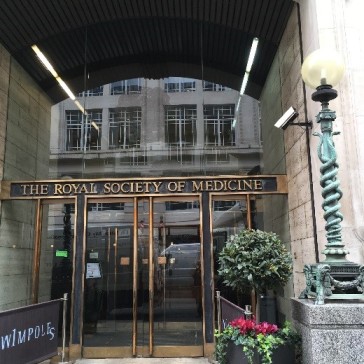 The meeting was held at the prestigious Royal Society of Medicine at No.1 Wimpole Street. At the entrance visitors are greeted by lamps featuring entwined snakes which are believed to represent either the caduceus or the Rod of Asclepius – both of which refer to medicine and healthcare.

It was a packed agenda with presentations covering the whole spectrum of neonatal care, from nutrition to extubation, and from genetics to neurology. It was exciting to see two systematic reviews on the programme. The PaReNt presentation was fortunate to follow an excellent presentation from Dr Susanna Sakonidou from Imperial College London, who presented the results of their systematic review about parental satisfaction within the NICU.

Interestingly, none of the included interventions featured peer support. Conclusions were that there needs to be a more standardised routine assessment of parent satisfaction. When the clinicians in the audience were asked about practices within their units, very few responded that parent satisfaction surveys was something that was regularly carried out.

Becca and Harriet presented the findings of the NIHR funded PaReNt systematic review and walked attendees through the stages of the project, acknowledging the pivotal role of the Parent Advisory Group (PAG). It was interesting to note the similarities with the review of parent satisfaction highlighting both the lack of appropriate outcomes and the large variation in approaches identified. The audience very much enjoyed the graphic summaries produced for the project by Scriberia. 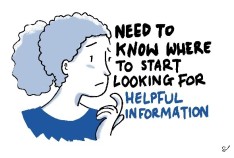 There was active interest from a number of units who appeared to be starting their own peer support, despite the fact there is no strong evidence support base. Emails were exchanged and hopefully some interesting opportunities lie ahead. As always, it was energising to take the research out to the people who are actively involved in the field and can influence changes within the system.

Keep an eye on @EvidSynthTeam for news on our publication – coming soon! In the meantime you can find out more about the project on our project page. Further information is also available from the protocol published in Systematic Reviews.